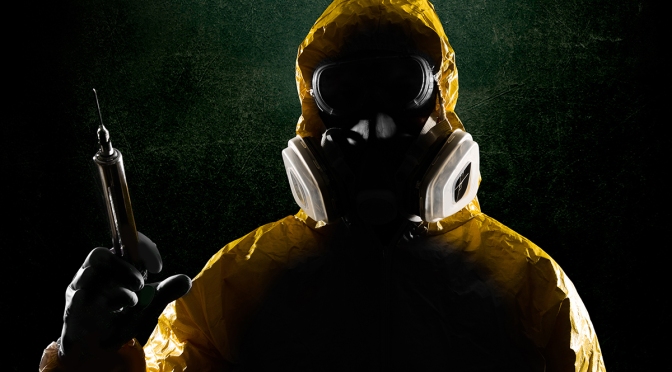 We’ve all dabbled in it, haven’t we? Whether we’re burning magnesium in the chemistry lab because ooh shiny, or enjoying metabolic energy conversion while eating a Mars bar; science is great.

But science gets a bad rap in fiction, variously denounced for being arduously exhaustive or irresponsibly lazy. Rarely does “the science” catch a break.

Nor will I throw it one here, in this review of The Andromeda Strain, Michael Crichton’s breakthrough novel back in 1969.

The story tells of an extra-terrestrial biological organism brought to earth aboard a satellite that reaps blood-clotting havoc over a small town in Arizona.

But don’t get too excited, because Crichton takes what might have been an interesting sci-fi adventure and meticulously syphons all the fun out of it drip by drip with endless explanations, implausibly dull confidential facsimiles and exhaustive scientific processes.

The pacing is glacial. Here’s a synopsis of the opening chapters:

Note: Chapter 4 is less concerned with the content of that phone call than with the method in which the number is dialled. It devotes two thirds of the chapter to describing how Manchek converts the number 87 into binary using base-two raised to incremental powers. This sci-fi thriller has quickly descended into a maths lesson.

And that’s the thing: I’m not sure if Andromeda is just rather dated in thinking we’re impressed by pseudo-realism and classified bureaucracy, but there are large swathes of the book that are unreadable gibberish.

The story’s greatest failing is how often you feel impelled to scan, rather than read.

Meanwhile, the “characters” are characters in name alone – few of them are discernible from each other without extensive analysis, all speaking in the same parlance, with the same voice and the same humour. I couldn’t tell you now which was the pathologist, and which was the microbiologist. Major Manchek’s a bit moody. That’s about all I could glean.

It’s just DULL. Check out the names of these chapters:

“Miscellaneous“?! My God, that sounds riveting. And if your sarcasm detector is malfunctioning, please manually set it to OBVIOUS.

Here’s a page from Miscellaneous:

The book is full of this kind of thing, from risk evaluations to amino acid counts; from heavily encoded classified documents to unreadable maps.

There are two scenes that stand out. The first depicts the wife of one of the scientists answering the door to armed military men, who ask for her husband but won’t explain what they want from him. She is even more bewildered by his calm response and unexplained will to leave under their guard. It’s almost chilling – a good scene. (You know, because drama.)

The second is the culmination of the story in arguably its only episode containing action, though it is deeply flawed in itself. At least your blood got pumping reading it.

(Up to this point you wonder if your own system had been infected with the eponymous blood-clotting Andromeda strain, rendering you too weak to keep your eyes open.)

I’m referring to the ticking clock episode at the end. Yes, it’s clichéd to have such a device, but the book was so woefully lacking in excitement, you forgive it this minor trespass.

However, what remains unforgivable is the supposed automated tranquilising defence system that almost entirely fails to shoot darts accurately at a human – its sole purpose. The drama itself is tranquilised with every inexplicable near miss.

To add insult to injury, the end is unremittingly anti-climactic, entirely resolved through no actions of any of the characters involved – it just goes away. Yes, “Very H G Wells”, I hear you say. But War of the Worlds gets away with this by being deeply allegorical, namely of the British Empire’s brutal colonialism; the narrator’s lament of the actions of mankind is the real ending. Here, it goes away just feels lazy.

I cannot fathom how this became such a big hit upon release, apart from a condescending supposition that people in the late-1960s were easily fooled by the “true story” Acknowledgements, or bamboozled by technical jargon into a state of respectful delirium.

“This is a rather technical narrative, centring on complex issues of science. Wherever possible, I have explained the scientific questions, problems, and techniques. I have avoided the temptation to simplify both the issues and the answers, and if the reader must occasionally struggle through an arid passage of technical detail, I apologize.”