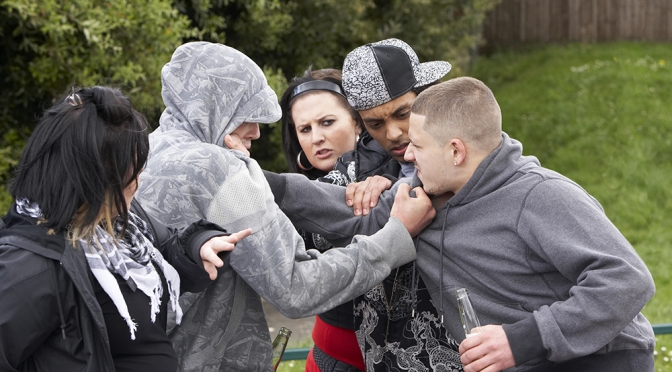 Picture this scene of animosity:

Thug: “You should always use the Oxford comma – you ambiguous fool!”

Oaf: “No, you should never use the Oxford comma – you stifling puritan!”

All right, lads, calm down. Don’t fall out over it, yeah?

You might have heard this kind of altercation on “the streets”, as crazed grammar bandits spit their heated comma quarrels at each other with impunity.

But that’s not fair, is it? We don’t have to stand by as their wrath wafts over us, like a fog of fury, do we? No!

But what do we need to confront this dogmatic dispute? An opinion?

Actually, no – everyone you ever spoke to who had an opinion on the Oxford comma has been wrong. Dead wrong – yeah, that’s right: everyone.

“But Tim, how can that be?” I hear you ask, inaudibly. “Surely someone out there must have figured it out, right?”

But before we get on to that, let’s remind ourselves – and those unaware of grammar’s most divisive usage issue – what the Oxford comma actually is.

One, two, and three

Put simply, the Oxford comma is a seemingly superfluous comma at the end of a list that precedes the last object. So, for instance, the second of these sentences includes the comma in question:

The park has a swing, a bench and some trees.

The park has a swing, a bench, and some trees.

See that second comma? That particular mark hails from the Saxon town of Oxford. Both of those sentences are correct, yet pedants of a particular persuasion deem each of them separately wrong.

For advocates of this polarising punctuation, the Oxford comma is essential to avoid potential misunderstandings, which usually arise from the use of a plural in a list of things. Par example:

George Osborne likes to shit on the poor, Jeremy Corbyn and Tim Farron.

“The poor” – being plural in this instance – might refer to the two leaders of the UK opposition, Messrs Corbyn and Farron, without the extra comma to divide them from the prior plural. However, we can separate the politicians with an Oxford comma to re-establish our meaning, thusly:

George Osborne likes to shit on the poor, Jeremy Corbyn, and Tim Farron.

Of course, this confusion can be easily avoided by shunting “the poor” to the end (typical, eh?) for the unambiguous and Oxford-comma-free sentence:

George Osborne likes to shit on Jeremy Corbyn, Tim Farron and the poor.

In fact, the Oxford comma should be used to militate against misunderstanding, but it should not be used when it stunts a narrative’s rhythm.

You see – everyone was WRONG (while also being right a lot of the time – like the minute hand on a stopped clock).

The park has a swing, a bench, and some trees.

To me, that second comma is like a single raised eyebrow. It says, yes, these three objects are common in parks: swings, benches… and trees. Now that you come to mention it, there’s definitely something about them trees…

Is there something… in those trees? Why else are they separate? What makes them so… other? Why did you pause – just for a millisecond, a near-unperceivable hesitation – before you mentioned those trees? What significance do they hold?

We’re adults now; we are aware there is as much rhythm in prose as in poetry. And we understand that meaning can be inferred in the ebb and flow of a sentence, especially in its pauses. We know this, because we use pauses for emphasis, every, single, day.

Throwing in pauses at the behest of some silly rule, to the detriment of your narrative rhythm, is like looking suspiciously at every tree you see, in case just one of them turns out to be a deadly alien invader.

Treat the Oxford comma as a raised eyebrow, friends. It reveals otherness. It speaks in pauses, drawing hidden meaning from a twitch. It is at all times revealing, friendly, and suspicious.

7 thoughts on “The Oxford Comma? – Actually, you’re all wrong”