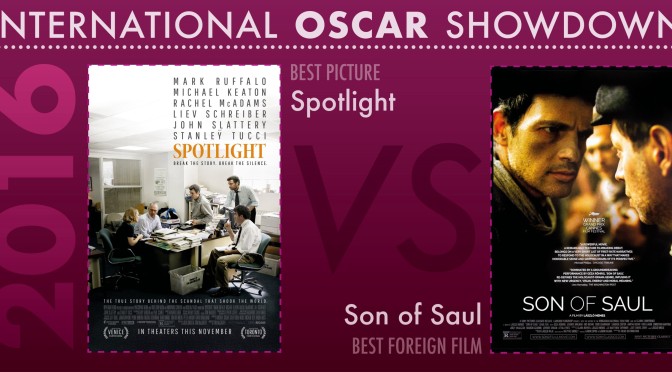 I haven’t done an Oscar Showdown for a long time, mostly because we started watching the 2016 winner of Best Foreign-Language Feature, Son of Saul, and had to stop half way for some reason. Thing is, I couldn’t muster the resolve to return to it for almost two months…

For those of you (most of you?) who aren’t familiar with this Hungarian movie, Son of Saul is probably the most harrowing depiction of Auschwitz ever committed to film. It is an astonishing piece of cinema, while being extremely difficult to watch.

I recommend it, though it’s difficult to recommend a good time to watch it. It’s like Schindler’s List, or Citizen Kane… or trying to get Swarns to watch the Godfather trilogy. You can’t just say “oh, do you fancy watching this Hungarian holocaust film?” – it is not a whim movie.

Anyway, I reviewed that and Spotlight for the 2016 International Oscar Showdown – if only Mad Max: Fury Road had won, eh? I don’t know what the Academy is up to, sometimes, I really don’t.

2016’s #InternationalOscarShowdown had two films about systemic abuse, one of which at its most extreme…

Spotlight vs Son of Saul (Hungary)https://t.co/fbSHjyhISW

I hope you all are well and staying sane. Wash your hands, black lives matter, Johnson out, and all that jazz…